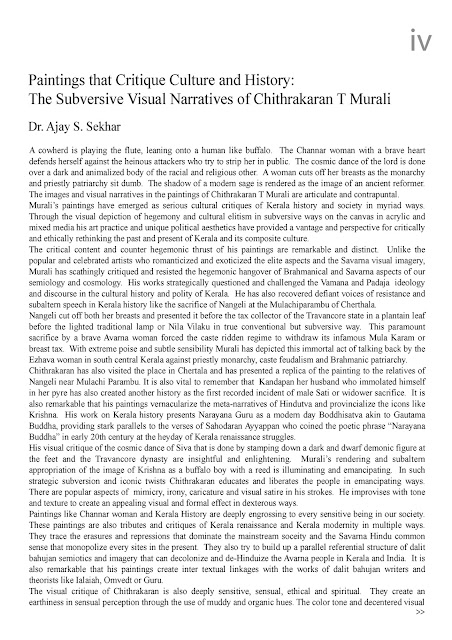 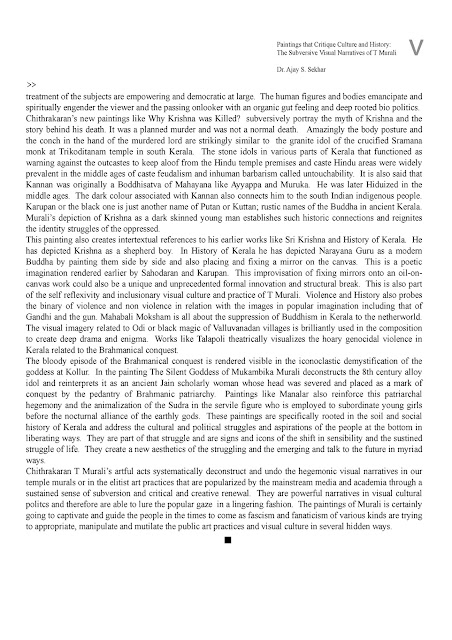 A cowherd is playing the flute, leaning onto a human like buffalo.  The Channar woman with a brave heart defends herself against the heinous attackers who try to strip her in public.  The cosmic dance of the lord is done over a dark and animalized body of the racial and religious other.  A woman cuts off her breasts as the monarchy and priestly patriarchy sit dumb.  The shadow of a modern sage is rendered as the image of an ancient reformer.  The images and visual narratives in the paintings of Chithrakaran T Murali are articulate and contrapuntal.

Murali’s paintings have emerged as serious cultural critiques of Kerala history and society in myriad ways.  Through the visual depiction of hegemony and cultural elitism in subversive ways on the canvas in acrylic and mixed media his art practice and unique political aesthetics have provided a vantage and perspective for critically and ethically rethinking the past and present of Kerala and its composite culture.

The critical content and counter hegemonic thrust of his paintings are remarkable and distinct.  Unlike the popular and celebrated artists who romanticized and exoticized the elite aspects and the Savarna visual imagery, Murali has scathingly critiqued and resisted the hegemonic hangover of Brahmanical and Savarna aspects of our semiology and cosmology.  His works strategically questioned and challenged the Vamana and Padaja  ideology and discourse in the cultural history and polity of Kerala.  He has also recovered defiant voices of resistance and subaltern speech in Kerala history like the sacrifice of Nangeli at the Mulachiparambu of Cherthala.

Nangeli cut off both her breasts and presented it before the tax collector of the Travancore state in a plantain leaf before the lighted traditional lamp or Nila Vilaku in true conventional but subversive way.  This paramount sacrifice by a brave Avarna woman forced the caste ridden regime to withdraw its infamous Mula Karam or breast tax.  With extreme poise and subtle sensibility Murali has depicted this immortal act of talking back by the Ezhava woman in south central Kerala against priestly monarchy, caste feudalism and Brahmanic patriarchy.

Chithrakaran has also visited the place in Chertala and has presented a replica of the painting to the relatives of Nangeli near Mulachi Parambu. It is also vital to remember that  Kandapan her husband who immolated himself in her pyre has also created another history as the first recorded incident of male Sati or widower sacrifice.  It is also remarkable that his paintings vernacularize the meta-narratives of Hindutva and provincialize the icons like Krishna.  His work on Kerala history presents Narayana Guru as a modern day Boddhisatva akin to Gautama Buddha, providing stark parallels to the verses of Sahodaran Ayyappan who coined the poetic phrase “Narayana Buddha” in early 20th century at the heyday of Kerala renaissance struggles.

His visual critique of the cosmic dance of Siva that is done by stamping down a dark and dwarf demonic figure at the feet and the Travancore dynasty are insightful and enlightening.  Murali’s rendering and subaltern appropriation of the image of Krishna as a buffalo boy with a reed is illuminating and emancipating.  In such strategic subversion and iconic twists Chithrakaran educates and liberates the people in emancipating ways.  There are popular aspects of  mimicry, irony, caricature and visual satire in his strokes.  He improvises with tone and texture to create an appealing visual and formal effect in dexterous ways.

Paintings like Channar woman and Kerala History are deeply engrossing to every sensitive being in our society.  These paintings are also tributes and critiques of Kerala renaissance and Kerala modernity in multiple ways.  They trace the erasures and repressions that dominate the mainstream soceity and the Savarna Hindu common sense that monopolize every sites in the present.  They also try to build up a parallel referential structure of dalit bahujan semiotics and imagery that can decolonize and de-Hinduize the Avarna people in Kerala and India.  It is also remarkable that his paintings create inter textual linkages with the works of dalit bahujan writers and theorists like Ialaiah, Omvedt or Guru.

The visual critique of Chithrakaran is also deeply sensitive, sensual, ethical and spiritual.  They create an earthiness in sensual perception through the use of muddy and organic hues. The color tone and decentered visual treatment of the subjects are empowering and democratic at large.  The human figures and bodies emancipate and spiritually engender the viewer and the passing onlooker with an organic gut feeling and deep rooted bio politics.

Chithrakaran’s new paintings like Why Krishna was Killed?  subversively portray the myth of Krishna and the story behind his death. It was a planned murder and was not a normal death.   Amazingly the body posture and the conch in the hand of the murdered lord are strikingly similar to  the granite idol of the crucified Sramana monk at Trikoditanam temple in south Kerala.  The stone idols in various parts of Kerala that functioned as warning against the outcastes to keep aloof from the Hindu temple premises and caste Hindu areas were widely prevalent in the middle ages of caste feudalism and inhuman barbarism called untouchability.  It is also said that Kannan was originally a Boddhisatva of Mahayana like Ayyappa and Muruka.  He was later Hiduized in the middle ages.  The dark colour associated with Kannan also connects him to the south Indian indigenous people.  Karupan or the black one is just another name of Putan or Kuttan; rustic names of the Buddha in ancient Kerala. Murali’s depiction of Krishna as a dark skinned young man establishes such historic connections and reignites the identity struggles of the oppressed.

This painting also creates intertextual references to his earlier works like Sri Krishna and History of Kerala.  He has depicted Krishna as a shepherd boy.  In History of Kerala he has depicted Narayana Guru as a modern Buddha by painting them side by side and also placing and fixing a mirror on the canvas.  This is a poetic imagination rendered earlier by Sahodaran and Karupan.  This improvisation of fixing mirrors onto an oil-on-canvas work could also be a unique and unprecedented formal innovation and structural break.  This is also part of the self reflexivity and inclusionary visual culture and practice of T Murali.  Violence and History also probes the binary of violence and non violence in relation with the images in popular imagination including that of Gandhi and the gun. Mahabali Moksham is all about the suppression of Buddhism in Kerala to the netherworld.  The visual imagery related to Odi or black magic of Valluvanadan villages is brilliantly used in the composition to create deep drama and enigma.  Works like Talapoli theatrically visualizes the hoary genocidal violence in Kerala related to the Brahmanical conquest.

The bloody episode of the Brahmanical conquest is rendered visible in the iconoclastic demystification of the goddess at Kollur.  In the painting The Silent Goddess of Mukambika Murali deconstructs the 8th century alloy idol and reinterprets it as an ancient Jain scholarly woman whose head was severed and placed as a mark of conquest by the pedantry of Brahmanic patriarchy.  Paintings like Manalar also reinforce this patriarchal hegemony and the animalization of the Sudra in the servile figure who is employed to subordinate young girls before the nocturnal alliance of the earthly gods.  These paintings are specifically rooted in the soil and social history of Kerala and address the cultural and political struggles and aspirations of the people at the bottom in liberating ways.  They are part of that struggle and are signs and icons of the shift in sensibility and the sustined struggle of life.  They create a new aesthetics of the struggling and the emerging and talk to the future in myriad ways.

Chithrakaran T Murali’s artful acts systematically deconstruct and undo the hegemonic visual narratives in our temple murals or in the elitist art practices that are popularized by the mainstream media and academia through a sustained sense of subversion and critical and creative renewal.  They are powerful narratives in visual cultural politcs and therefore are able to lure the popular gaze  in a lingering fashion.  The paintings of Murali is certainly going to captivate and guide the people in the times to come as fascism and fanaticism of various kinds are trying to appropriate, manipulate and mutilate the public art practices and visual culture in several hidden ways.
Posted by chithrakaran ചിത്രകാരന്‍ at 9:19 PM