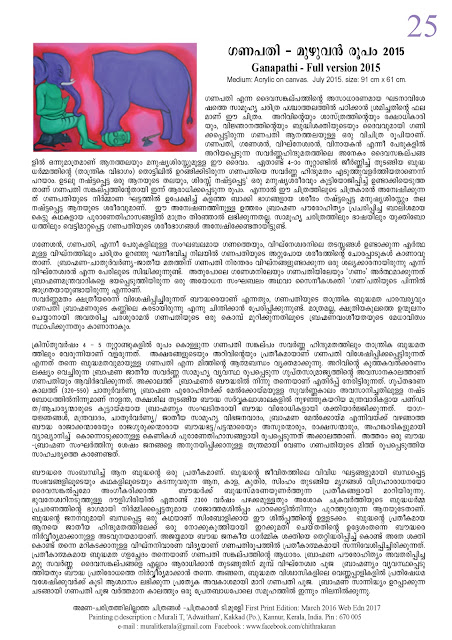 This painting is the outcome of an effort to understand the curious construct of the image of Lord Ganapathy (Ganesh) in its relevant social and historical background. Lord Ganapathy, who is considered the tutelary divinity of Knowledge and the scriptures and is the Lord of intelligence and wisdom, has a bizarre image: a human with the head of an elephant!
This god with the elephant's head, one of the many Hindu deities, is known by several names like Ganapathy, Ganesh, Vigneswara, Vinayaka etc. It can be assumed that this God was taken and fostered by the casteist Hindu religion from the cradle of the then declining Buddhist religion (the tantric faction of buddhism) around the fourth century. The God Ganapathy's image which is being worshiped now-a-days is the body of a human who had lost his head and the head of an elephant which had lost its body, joined together . But this artist is searching for the parts discarded and lost while the form of Lord Ganapathy was concieved, the head of the human, and the body of the elephant. The answer to that search may not be available in the frivolous myths propagated by the brahmanic priesthood. The search, for those parts discarded, are to be extended into the domains of social history and our logical reasoning.
The idea of the collective-strength can be seen in the "gana" root of his names Ganapathy and Ganesha. And the 'vigna', resistance, the causing of hindrance, to the castieist- chathurvarnya-brahmanic religion, can be read in his decapitated head. The 'gana' in his name point to the vigilant resistance-group supporting him. The context, that the castiest Hindu religion referred to Buddhists, as 'Kshatriya', (Jaina followers reffered as 'Vysya') and that Ganapathy has a tantric Buddhist heritage brings about an idea that Ganapathy was an annoyance to the Brahmans. There is also a myth of Parasurama, whose mission was to annihilate the 'Kshatriyas'(Buddhist) and the cutting off one tusk of Ganapathy can be read as an allegory to the establishing of brahmanic supremacy.
As far as Buddhists were concerned, elephant is a symbol of the Buddha. Many animals like elephant, bull, horse etc which are described in the epic of Buddha's life were his memorials by the Buddhists who were not idolaters. There is a statue, aprox. 2300 years old, of an elephant coming out of a rock formation in Dhaulagiri near Bhuvaneshwar, sculpted as part of the Buddhist evangelism of emperor Asoka. This statue symbolically depicts a story related to Buddhas birth. Importing the image of elephant, which was a symbol of Buddha, into casteist Hindu religion was a plot to diffuse Buddhists. The concept of Ganapathy was a technique to defeat and surmount, the inexorable moral strength of the Buddhist ideology using its own images and misleading by such symbolic representations.
The present image of the God Ganapathy was formed during the fourth and fifth centuries of the Christian era, in the castiest Hindu and the tantric- Buddhist religions. The concept of Ganapathy, considered as the embodiment of alphabets and knowledge, highlights his relevance to the Buddhist thought and religion. The casteist- brahmanic-social setup, whose modus operandi to retain hegemony was to monopolize knowledge, gained upper-hand towards the end of the Gupta regime. During that time the adversaries of the brahmins were the Buddhists. After the Gupta regime (AD. 320-550) the castiest-brahmin-priests lost their glory and supremacy in the society and a disgruntled lot of these sorcerer-wizard-scholars infiltrated the centers of advanced learning like 'Nalanda' and 'Takshashila', and established strong caucuses of antagonists of Buddhism. The plots for destroying those kings who did not conform to their policies of Yaga-yajnas, sorcery, dismembering the society into castes, establishing a status of unquestioned supremacy of brahmins in society etc., declaring them to be 'Asuras', 'Rakshasas' and despots, where hatched during that period. Under these circumstances we can reasonably assume that the formulation of the Ganapathy myth was to assuage the wrath of the general public, after such a genocide of the Buddhists by the brahmin priests.
Ganapathy is a symbolic representation of the beheading of the Buddhists. That is why offerings to Ganapathy is made mandatory before the offerings to all the other divinities that the brahmins have introduced. Thus the worship of Ganapathy became acceptable and became a solace even to those Buddhists who were reluctant to leave their allegiance to their former religion. Today on all auspicious occasions, the ritual of offerings to Ganapathy which ensures the presence of a brahmin priest , haunts our society.
Carrier Mouse:
It is to be considered that the carrier of Lord Ganapathy is an insignificant rodent. A harebrained, elephant-headed, gluttonous, bloated god image riding a small mouse, reveals the hatred, animosity , vengefulness, mockery and the despise that the brahmin priests nurtures in their collective racist memory towards Ganapathy. The story of Parasurama, an incarnation of Vishnu and the destroyer of kshathriyas, confronting Ganapathy and cutting off his tusk can also be read as a reference to the vengefulness of the priesthood. In short, Ganapathy is a matyr. The deified victim of brahmin priesthood, in their infamous machinations to subdue the tantric Buddhists.


(My sincere Thanks to Ms. Jaya M for English translation)